With the hard right running left and the center-left abdicating, Euroskeptics could accelerate a continent-wide crisis. Global migration is on the rise as climate change drowns coastlines, river deltas and drought drives people out of arid climates. 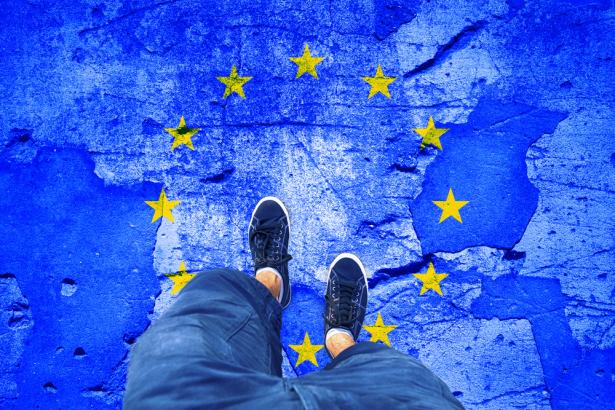 As the campaigns for the European Parliament get underway, some of the traditional lines that formerly divided left, right, and center are shifting, making it harder to easily categorize political parties.

In Italy, a right-wing coalition calls for a guaranteed income, larger pensions, and resistance to the heavy-handed austerity programs enforced by the European Union (EU). In France, some right-wing groups champion the fight against climate change, decry exploitation of foreign workers, and growing economic inequality.

In contrast, Europe’s political center seems paralyzed in the face of growing disillusionment with the economic policies of the EU. Even the social democratic center-left defends doctrines that have alienated its former base among unions and working people, pushing such parties to the political margins.

If voters seem confused, one can hardly blame them, which is not good news for the left and the center-left going into the May 23-26 elections. Polls show center-right and center-left parties, which have dominated the EU Parliament since it first convened in 1979, will lose their majority. Parties that are increasingly skeptical of the organization may win as many as a third of the seats in the 705-seat body.

How the Center Opened Space for the Right

However, “Euro-skeptic,” like “populist,” is a term that obscures more than it reveals.

In the polls, the two are lumped together in spite of profound differences. The Spanish left party, Podemos, is not likely to break bread with Italy’s right-wing Northern League- Five Star alliance, but both are considered “Euro-skeptic.” Podemos, along with Greece’s Syriza, Portugal’s three party center-left alliance, and La France Insoumise (“Unbowed”) are critical of the EU’s economic policies, but they do not share an agenda with xenophobic and racist parties like the Northern League, France’s National Front, and the Alternative for Germany (AfG).

Which doesn’t mean that the upcoming election doesn’t pose a serious threat, in part because the Right has adopted some of the Left’s longstanding issues.

In Italy, Mario Salvini, leader of the League, says the EU elections will be fought between a Europe “of the elites, of banks, of finance and immigration and precarious work,” and a “Europe of people and labor.” Take out “immigrants,” and the demagogy of the Right sounds a lot like something Karl Marx might write.

Of course, she also trashes immigrants and Islam, while advocating for a “traditional Christian community” that sounds like Dark Ages Europe.

During the 1990s, the center-left — the French, Spanish, and Greek socialists, the German Social Democrats, and British Labour — adopted the “market friendly” economic philosophy of neo-liberalism: free trade and globalization, tax cuts for the wealthy, privatization of public resources, and “reforming” the labor market by making it easier to hire and fire employees. The result has been the weakening of trade unions and a shift from long-term stable contracts to short-term “gigs.” The latter tend to pay less and rarely include benefits.

The Ravages of Austerity

Spain is a case in point.

On the one hand, Spain’s economy is recovering from the 2008 crash brought on by an enormous real estate bubble. Unemployment has dropped from over 27 percent to 14.5 percent, and the country’s growth rate is the highest in the EU.

On the other hand, 90 percent of the jobs created in 2017 were temporary jobs, some lasting only a few days. Wages and benefits have not caught up to pre-crash levels, and Spanish workers’ share of the national income fell from 63 percent in 2007 to 56 percent today, reflecting the loss in real wages.

The “recovery” has come about through the systematic lowering of living standards, a sort of reverse globalization: rather than relying on cheap foreign labor in places where trade unions are absent or suppressed, the educated and efficient home grown labor force is forced to accept lower wages and fewer — if any — benefits.

The outcome is a growing impoverishment of what was formerly considered “middle class” — a slippery term, but one that the International Labor Organization defines as making an income of between 80 percent and 120 percent of a country’s medium income. By that definition, between 23 and 40 percent of EU households fall into it.

For young people, the “new economy” has been a catastrophe. More and more of them are forced to emigrate or live at home to make ends meet, putting off marriage and children for the indefinite future.

This income crunch is adding to a demographic crisis.

In a modern industrial society, the required replacement rate of births to deaths is 2.1. (The world’s replacement rate is 2.44.) If economies fall under 2.1, they are in for long-term trouble. Eventually the work force will be insufficient to support health care, education, sanitation, and infrastructure repair.

The EU posts a replacement rate of only 1.57. Germany is one of the few EU countries that has shown a rise in the ratio — from 1.50 to 1.59 — but that is almost completely due to the 1 million immigrantsthe country took in four years ago.

The three countries that are leading the crusade against immigrants — Hungary, Poland, and Italy — are in particular trouble.

Hungary, where strongman Victor Orban has made immigration a central issue for his right-wing government, is struggling with a major labor shortage. Orban recently rammed through a lawrequiring Hungarians to work 400 overtime hours a year to fill the shortfall, and he has been berating Hungarian women to have more babies.

In Italy, the right-wing Northern League-Five Star Movement coalition rode anti-immigrant rhetoric to power in the last spring’s election, but with a replacement ratio of only 1.31 — the lowest in the EU — the country is losing the equivalent of the population of the city of Bologna every three years.

All one has to do to see where this ends is to look at Japan, where an aging population has created such a crisis that the normally immigration restrictive Japanese are importing health care workers. China has similar demographic problems.

Playing on fears of a migrant “invasion” alarms people, but is it an assured vote getter? In recent German elections, the AfG ran strong anti-immigrant campaigns but ended up losing badly to the Greens. The latter have a more welcoming posture vis-à-vis migrants than even the German Social Democrats.

If Germany does not address the problem, its population will decline from 81 million to 67 million by 2060, and the workforce will be reduced to 54 percent of the population — not nearly enough to keep the country’s current level of social spending.

Much was made of recent electoral gains by the anti-immigrant, neo-fascist Vox Party in Spain’s southern province of Andalusia, but if Spain does shut down the flow of migrants it will be in serious difficulty. The country’s population has declined since 2012, and there are provinces where the ratio of deaths to births is 3 to 1. More than 1,500 small towns have been abandoned.

Polls indicate that immigration tops EU voters’ concerns, but just. It is only a few percentage points ahead of the economy and youth unemployment.

The right — in particular Hungary’s Orban — has done a masterful job of tying “liberal” to the neo-liberal policies of the EU. Unfortunately, it is an easy argument to make. Most “liberals” in the west associate the term with freedom, democracy, and open societies, but many people in the EU experience “liberal” as a philosophy of rapacious individualism that has dismantled social services, widened the gap between rich and poor, and enforced a system of draconian austerity.

Of course Orban, Marine Le Pen, the Italy’s Matteo Salvini, and Germany’s AfG are interested in power, not the plight of the EU’s 500 million citizens. And for all its talk of resistance, the Northern League-Five Star Movement government folded when the EU nixed an Italian budget that included a guaranteed income and higher pensions.

Global migration is on the rise as climate change drowns coastlines and river deltas and drought drives people out of arid climates in the Middle East, Africa, South Asia, and Latin America. By 2060, as many as 3 billion people could be affected.

Which argues that the Left and center-left have a responsibility not only to resist the economic philosophy that currently dominates the EU, but to see immigrants for what they are: potential allies — and the future.

As for the Right, it is useful to recall some not so ancient history. In 1934, the Nazi Party’s German Labor Front struck a medal that read “Tag Der Arbeit” (“The Day of Labor”) and featured a Nazi eagle grasping a swastika, each wing tip embracing a hammer and a sickle. But the first victims of the Nazis were communists and trade unionists.

[Foreign Policy In Focus columnist Conn Hallinan can be read at dispatchesfromtheedgeblog.wordpress.com and middleempireseries.wordpress.com.]