The United Electrical Workers was one of America’s mightiest unions. Many leaders were leftists who challenged corporate power, so UE was decimated by McCarthyism. The union survived and UE's model of militant, democratic unionism can revive labor.

August 10, 2020 Jeff Schuhrke Jacobin
Printer friendly
The US Labor Movement Needs More of the UE’s “Them and Us” Unionism Published August 10, 2020 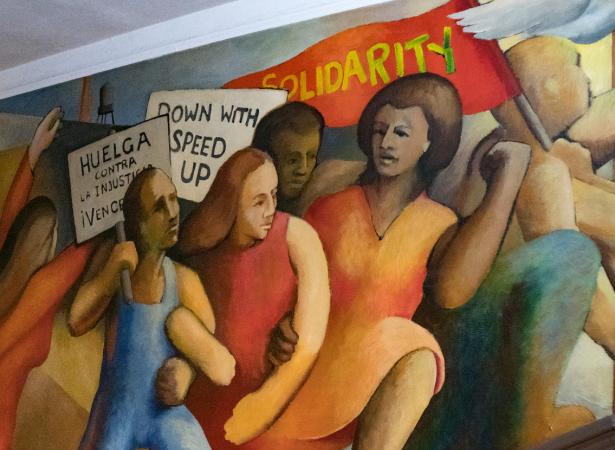 Cover of the United Electrical, Radio, and Machine Workers of America new booklet "Them and Us.", UE

The anti-communist fervor and McCarthyist repression that swept the United States in the late 1940s and early 1950s drastically changed the course of labor history. These years witnessed the destruction of the Congress of Industrial Organizations (CIO) — the dynamic union movement that adopted militant shop floor tactics and a class-conscious vision to rapidly organize millions of previously unorganized workers in the 1930s.

Surrendering to Cold War red-baiting, CIO leaders orchestrated the raiding and expulsion of eleven national unions — not because these unions were corrupt or failing to win good contracts for their members, but because they were either led by Communists or deemed too tolerant toward the Left.

The first target was the United Electrical, Radio, and Machine Workers of America (UE), which was then the third-largest union in the CIO. Founded in 1936 by a few dozen industrial workers and leftist organizers in their twenties and early thirties, UE embodied the spirit of rank-and-file, class-struggle unionism that originally allowed the CIO to pose an unprecedented challenge to the power of capital.

UE’s formal ouster at the 1949 CIO convention, and the others that soon followed, cost the CIO its most dedicated and visionary unionists. Rendered a shell of its former self, the CIO became virtually indistinguishable from the more conservative American Federation of Labor (AFL), with which it merged in 1955.

The US labor movement has never recovered, with union density consistently in decline since the mid-1950s and economic inequality steadily on the rise — and progressive, democratic, militant unionism all but erased.

But UE is still here. Seventy years after being kicked to the curb by anti-communist labor officials, the independent union — now with about 35,000 members from a variety of industries — continues to adhere to its founding principles of militant class-struggle, rank-and-file democracy, and worker-to-worker solidarity.

As a living example of what unionism looked like before McCarthyism poisoned the CIO, UE’s history and philosophy offer an insight into what the US labor movement could have been in the second half of the twentieth century — and what it could be today. The union is at once a reminder of a bygone, heroic era of labor history, and a prototype of the kind of movement workers can organize in the twenty-first century.

In a new booklet, which is a must-read for anyone serious about building working-class power, UE straightforwardly spells out the key elements of its model of “Them and Us” unionism.

In light of socialism’s growing popularity, Bernie Sanders’s two presidential runs, and movements like Occupy Wall Street and Black Lives Matter, “we can talk about the economic system plainly in a way that unions really have not been able to since the late 1930s and early 1940s,” says UE general president Carl Rosen.

He says that the pamphlet is meant to inspire a new generation of working-class activists, both within and outside UE. It is particularly timely as non-union essential workers organize to protect themselves amid the coronavirus pandemic — illustrated by the recently formed Emergency Workplace Organizing Committee (EWOC), a joint project of UE and the Democratic Socialists of America.

“We would hope the booklet inspires a conversation among some of the best folks in the labor movement, and also among our allies, about the power of class-struggle unionism and why we need to be looking at it again as a way to deal with the problems we confront,” Rosen says.

UE has always had a clear-eyed understanding of how capitalism functions. The union argues that workers are not underpaid or overworked simply because some employers misbehave now and then. Instead, the exploitation of labor is a permanent feature of the dominant economic system, which divides society into a tiny class of those who live by owning (which UE calls “them”) and a much larger class of those who live by working (which UE says is “us”).

Without centering the fundamental conflict between “them and us,” UE contends, no strategy to reinvigorate organized labor, no matter how clever or innovative, will ever be truly effective.

This explicit class consciousness is enshrined in the UE constitution, which calls on workers to rely first and foremost on their own collective power — not only to bargain and enforce contracts at individual workplaces, but to advance the interests of the entire working class by fighting in the wider political arena.

To foster genuine union democracy and prevent leadership from getting out of touch, UE’s constitution mandates that the union’s top elected officers receive salaries no higher than that of the best paid rank-and-file members.

Instead of relying solely on paid, professional staff organizers, UE is driven by a robust system of stewards — rank-and-file members who receive the necessary training to negotiate contracts, pursue grievances, and organize job actions on their own. Strong steward systems are the antithesis of entrenched union bureaucracies that cut backroom deals with employers.

UE’s dedication to militant rank-and-file struggle can be seen through its many dramatic confrontations with employers over the years. Some of these include a 102-day strike at General Electric in 1969–70, which resulted in historic concessions from the company’s intransigent management; the 2008 occupation of Chicago’s Republic Windows and Doors factory, which led to laid-off workers getting a $1.75 million settlement and the eventual reopening of the plant as a cooperative; and last year’s nine-day strike in the freezing cold of Erie, Pennsylvania, which resulted in manufacturing workers winning a first contract with Wabtec, the company that recently took over GE Transportation.

“When the workers realize that the few folks in the boardrooms are messing with our livelihoods, that’s when the rage sets in,” explains Bryan Pietzrak, a steward with UE Local 506 who participated in last year’s Wabtec strike.

Pietzrak adds that the union skillfully tapped into that anger by enlisting Wabtec workers to fight back. “Once that rage turns into solidarity, the company is screwed,” he says.

As for political engagement, UE’s approach is different from most other unions in that it maintains independence from both major parties, only backing specific candidates who champion the working class — evident in the union’s longtime support for Bernie Sanders. Further, UE doesn’t have a political action fund doling out huge campaign donations; instead, the union utilizes the power of its membership to get out the vote and put pressure on lawmakers.

In addition to aggressive struggle and union democracy, another core UE principle is unity among all workers. As the union’s constitution makes clear, UE’s founders were dedicated to organizing workers “regardless of craft, age, sex, nationality, race, creed or political beliefs” — an inclusive attitude that was still considered radical in 1936, when it was common practice for unions to limit membership to “skilled” white men.

UE was a trailblazer in winning nondiscrimination clauses in its contracts in the 1940s and 1950s, and was also the first US manufacturing union to elect a woman as a national officer in 1985.

In addressing globalization and free trade agreements, the union has refused to cast blame on foreign workers for “stealing” US jobs, instead directing the blame at corporate capital. UE has focused on building international solidarity with workers abroad, most notably through its nearly thirty-year partnership with the Frente Auténtico del Trabajo, Mexico’s independent labor federation.

“It’s not just about UE,” Rosen says of the solidarity-based unionism laid out in the booklet. He notes that other unions already put this into practice, including the Chicago Teachers Union, which has reinvented itself over the past decade in order to fight and win based on these principles; and the International Longshore and Warehouse Union, which, along with UE, is the last of the old leftist-led CIO unions that were expelled in 1949–50.

“This tradition ran through most of the CIO unions, and in fact accomplished much of what the labor movement achieved over the last 85 years,” he says. “It’s what is needed now to carry things forward and try to rebuild an effective fighting force for the working class.”

Rebuilding and revitalizing the US labor movement in the twenty-first century will require the same kind of vision and dedication from today’s leftists as inspired the young organizers and Communists who founded UE almost eighty-five years ago. If more workers were organized along UE’s model of “Them and Us” unionism, the working class would be in a much better position to remake the world.

UE is proud to announce the publication of a new booklet, Them and Us Unionism, which outlines our philosophy of unionism. We believe that it is time for the broader labor movement to return to the sort of class-struggle unionism that established the CIO and which UE has continued for over eight decades.

“Modern class-struggle unionism won’t look the same as it did in the 1930s, but we believe the same approach to struggle, which recognizes the fundamental difference of interest between workers and employers in the capitalist system, is necessary,” said UE General President Carl Rosen.

Reviewing the new booklet in the magazine Jacobin, labor historian Jeff Schuhrke writes that ‘The US Labor Movement Needs More of the UE’s “Them and Us” Unionism’:

“UE’s history and philosophy offer an insight into what the US labor movement could have been in the second half of the twentieth century — and what it could be today. The union is at once a reminder of a bygone, heroic era of labor history, and a prototype of the kind of movement workers can organize in the twenty-first century.”

Them and Us Unionism is also available in Spanish.