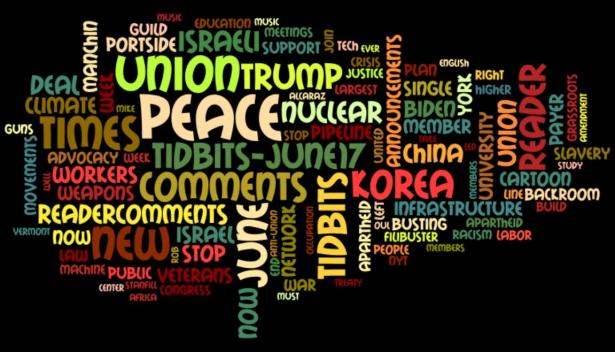 One Pipeline Down, More to Stop — Poster of the Week (Center for the Study of Political Graphics)

Re: Progressives Tell Biden “No Climate, No Deal” on Infrastructure Plan 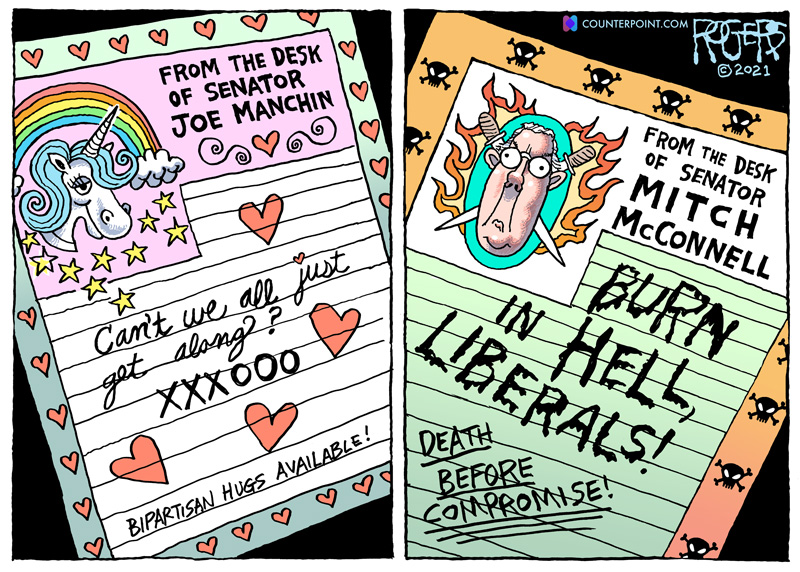 Re: The Case for Prosecuting Donald Trump

We should do this and stop this from happening again.

I'm astonished at your belief that Mr. Trump committed no crimes that are now, under existing laws, triable in our courts. Even more astonishing, President Biden seems to agree with you, and now our government will defend Mr. Trump against accusations of rape. What' next? Coronation of King Trump?

In-N-Out: That’s What Trump’s “Justice” Is All About  --  cartoon by Lalo Alcaraz 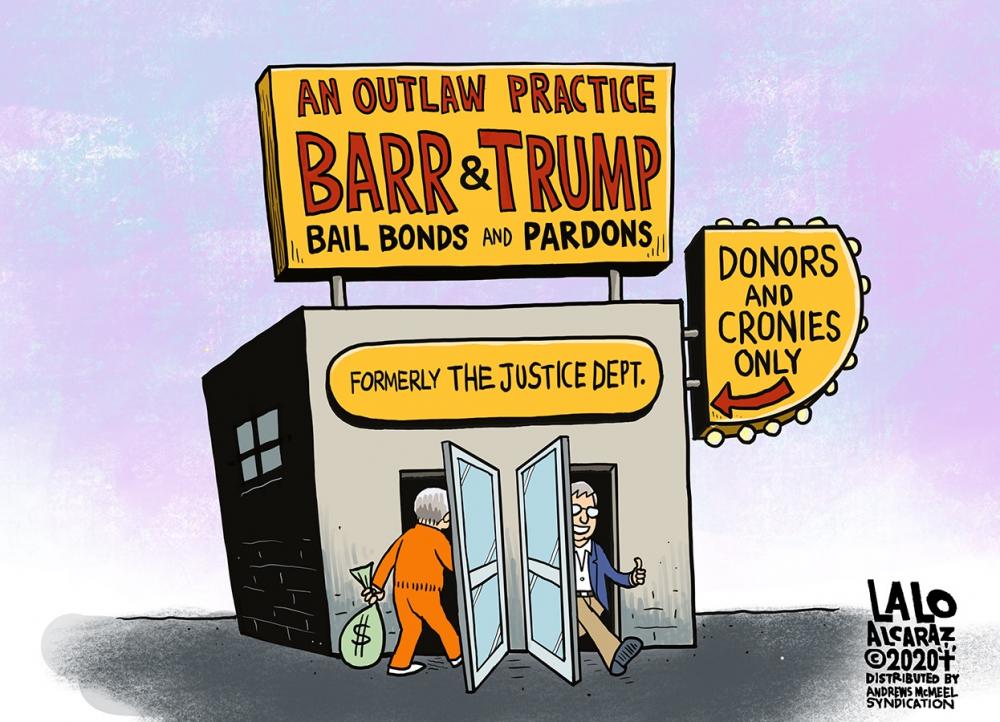 This is a shocking article! Nuclear weapons have not been a prominent issue for quite a few years, but obviously greater public vigilance is needed. In the media coverage of the G7 meetings, I have seen no mention of the escalation of nuclear weapons, which means the public is left uninformed. There needs to be a dramatic policy shift on this issue but the politicians are lackadaisical about it, and companies keep producing and making much money from it.

Re: Paid Sick Leave is a Women’s Health Issue

It's a public health issue as well.

Re: A Backroom Deal To Kill Single Payer

This is infuriating! I cannot believe that union memberships oppose single-payer health. This is a play by union leaders to keep justifying union existence. They really need to find another reason to justify themselves to their members and support this legislation that will be of HUGE benefit to most New Yorkers. Union members call your union leaders! 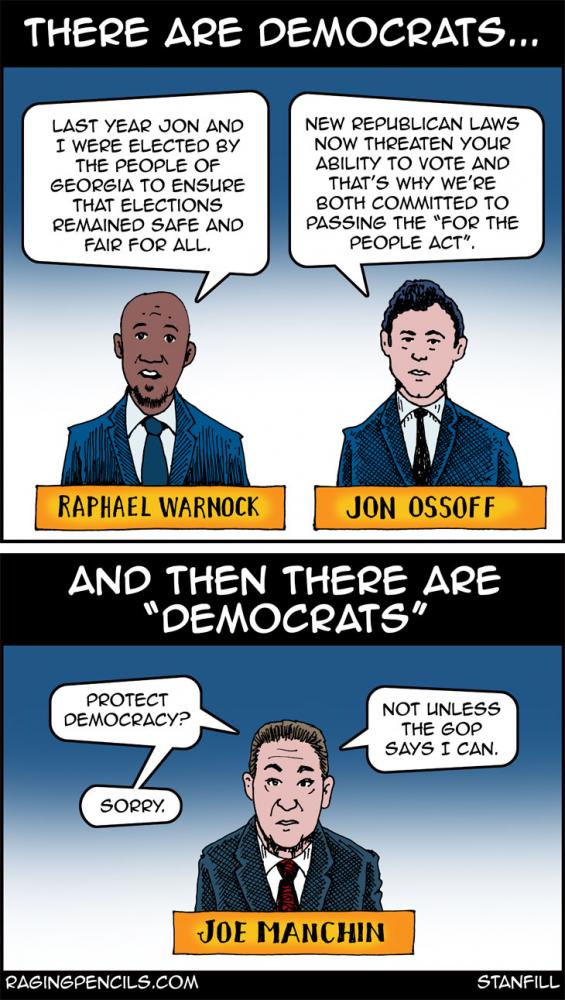 Re: How an American Family Raised on GE Wages Copes With Income Inequality

Read and share. This brief, powerful statement is one of facts as well as opinion. The signers can hardly be accused of anti-Semitism.

"The West Bank today consists of 165 'enclaves' – that is, Palestinian communities encircled by territory taken over by the settlement enterprise. In 2005, with the removal of settlements from Gaza and the beginning of the siege, Gaza became simply another enclave – a bloc of territory without autonomy, surrounded largely by Israel and thus effectively controlled by Israel as well.

"This week, we mark the fifty-fifth year since the occupation of the West Bank began. It is clearer than ever that the occupation is not temporary, and there is not the political will in the Israeli government to bring about its end.

"Human Rights Watch recently concluded that Israel has crossed a threshold and its actions in the occupied territories now meet the legal definition of the crime of apartheid under international law. Israel is the sole sovereign power that operates in this land, and it systematically discriminates on the basis of nationality and ethnicity.

"Such a reality is, as we saw ourselves, apartheid."

“It is clearer than ever that the occupation is not temporary, and there is not the political will in the Israeli government to bring about its end.”

Not really addressed in these articles is China's geopolitical role. You may be skeptical or cynical about the long term development of China from its 'first stage of socialism' but its importance for the independence of other countries is crucial. For example, Pedro Castillo, from an avowedly Marxist party has been elected President of Peru. As China is now Peru's main market for its copper, the USA will not be able to strangle the economy, as it did with Allende in Chile in 1971/3.

Re: America’s Gun Obsession is Rooted in Slavery

The Second Amendment recognizes the unalienable right of self defense, regardless of race, color, creed, sex, age, disability, ancestry, national origin, sexual orientation, social origin, or sexual identity.  Let each of us exercise this right now, because despots still abound, and the abuse of this instrument by slavers does not denigrate its fundamental, paramount importance.

AIM, Black Panthers, and Captain Herbert Aptheker’s midnight marches of African-American GI’s stationed in Alabama—in direct defiance of Alabama sundown ordinances—invoked the Second Amendment and all struck blows for liberty—deeds that must be remembered and renewed with fervor!

I wonder if our new "Originalist" member of the Supreme Court will remember the background for the Second Amendment when she rules on the "Constitutionality" of gun restrictions when it is claimed not to be for "Originalist" purposes.

How About - End Homophobia AND
AFTER HETEROSEXISM?

One Pipeline Down, More to Stop — Poster of the Week (Center for the Study of Political Graphics)

The Keystone Pipeline will not be built! This is a major victory for everyone organizing against climate change and reliance on fossil fuel.  The Canadian developer abandoned the project after President Biden revoked the permit.

But now we must block the Enbridge Line 3 pipeline, an even larger pipeline being built to transport the dirtiest of dirty oil extracted from Canadian tar sands. On Monday, June 7, 2021, the largest civil disobedience to-date against Line 3, took place in northern Minnesota.  Led by indigenous women, an estimated 3,000 water protectors gathered and more than 100 were arrested.

Meanwhile, the Dakota Access Pipeline, the target of many struggles, continues to operate until a court-ordered environmental review is finalized in 2022. 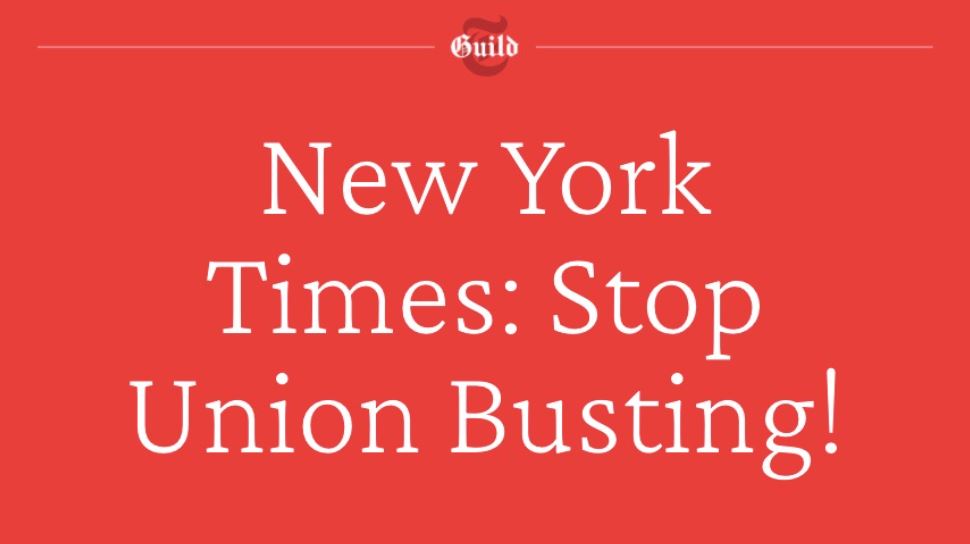 A strong majority of the 700 tech workers of The Times announced our union drive in April and requested voluntary recognition, a process which the Times editorial board endorses and that the company granted in 2019 to the Wirecutter Union. Times management responded with a concerted anti-union campaign to try to pressure and influence our coworkers through a series of mandatory anti-union meetings and misleading one-way communications. The Times has further escalated their anti-union campaign by violating federal labor law, so we have filed an Unfair Labor Practice charge at the National Labor Relations Board.

It is our right as workers to organize and show support for our union, and this right is protected by federal labor law. But Times management is telling our colleagues that we cannot show public support for our union if we work with interns or are seeking a promotion. Managers have also begun “polling” workers about their union support, a tactic that is forbidden by law as it is commonly used by management to interrogate, suss out, and target union supporters. The Times is using these combined coercive tactics to attempt to prevent us from exercising our rights to join together and bargain for a more equitable, sustainable, and diverse workplace. Our union, the Times Tech Guild, would be the largest union of tech workers to bargain for a contract in the United States. It is crucial that we put an end to the myth that tech workers are somehow different from other workers by enforcing our rights, both for our union and the future tech workers who will follow us.

It’s clear the Times won’t practice their own stated values without public accountability. Join us in telling CEO Meredith Levien: stop union-busting. Recognize our union, The Times Tech Guild, and meet us in good faith at the bargaining table.

The goal of this webinar is to demystify higher ed finance and prompt action. We want to emphasize that (1) austerity is not just about the loss of certain revenues and supposed shortfalls, but also about choices regarding how to use revenues, (2) TT and NTT faculty can get the skills and info to engage in budget action, and (3) faculty can build alliances with staff, students, alumni, and community for shared budget action to realign campus and statewide priorities.

The webinar panelists are:

You can register here

Grassroots Organizing: The New Poor People’s Campaign and Showing Up for Racial Justice

Progressives everywhere are concerned about the spread of white supremacy, neo-fascist movements linked emotionally to former president Donald Trump. Although Trump lost the 2020 presidential election, he managed to secure 74 million votes. As a result of the election, the Democratic Party has slim majorities in both legislative chambers, conservatives control the Supreme Court and campaigning has already begun for the 2022 Congressional elections. In addition, some 30 states are red; that is governorships and legislative bodies are controlled by the Republican Party.

While political movements struggling against racism, worker exploitation, misogyny and environmental damage have grown, the future remains unclear. And it is in this context that struggles to build multiracial working-class movements are more vital than ever. But what is being done to build such movements? What can progressives learn from on-the-ground movements? What must we do to attract those 74 million voters and build for survival in 2022 and 2024?

To address these issues, Peoples World.org and OUL are hosting a discussion on June 30, 2021. Please plan to attend and register in advance:.(After registering, you will receive a confirmation email containing information about joining the meeting.)

We invite you to attend and share your experiences and ideas.

Veterans For Peace is asking artists to write songs and create music videos around the theme of “Climate Crisis and The War Machine.”

The “Climate Crisis and The War Machine Music Video Contest” is about making the links that break the chains of big oil. The US military is the largest consumer of fossil fuels and the largest producer of greenhouse gas emissions. It’s time to challenge the status quo and free people from the illusion that war keeps us safe.

These videos will be featured not only as a part of the Veterans For Peace National Convention, but on our social media, website, and our Gamers For Peace Twitch Channel.  We will choose a first prize and runner up in each of the following five categories: Hip-hop, Pop, Country/R&B, Folk/Spoken Word, and Rock.  The music video can take many forms, anywhere from a live performance recorded on your phone, to a fully produced, multi-camera music video.  All levels of experience are welcome!  First prizes get $1000 each and runners up get $500 each.  In addition, each of the 10 winners chosen will perform at a concert for The Veterans For Peace National Convention on Aug 14, 2021.  (Official contest rules) 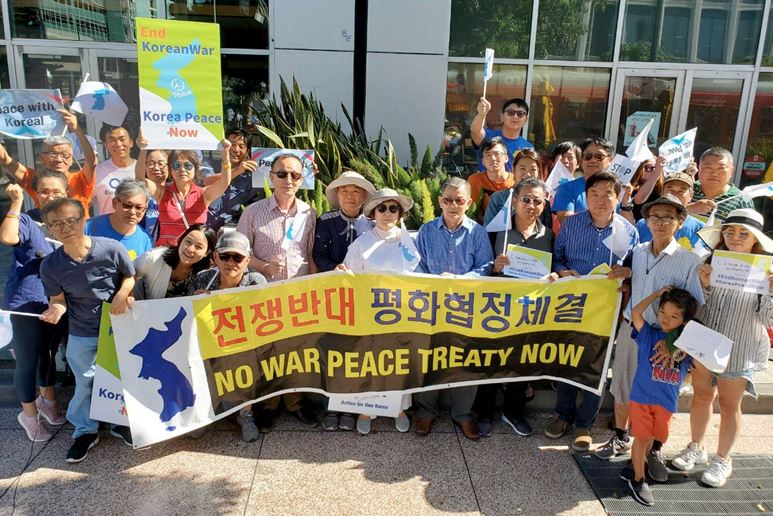 Join hundreds of people across the country in nationally coordinated virtual advocacy meetings to urge your Member of Congress to support: 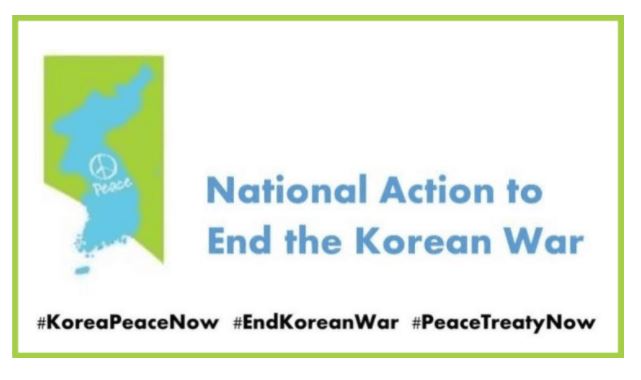 Prior to the advocacy week, you will

During the advocacy week, you will

After the advocacy week, you will: